The Shire’s device is Per pale gules and or, two dragons combatant above a laurel wreath all counter-changed.

The dragons were inspired by the Port Kembla Steelworks, whose steam and smoke is visible from the Illawarra Escarpment. The red and gold dragons of Adora have been fondly named by members of the Shire as “Frank” and “Daffyd”.

The Shire of Adora officially covers the South Coast regions of New South Wales, Australia, extending from the base of the Sutherland and Macarthur regions, down through to the border of Victoria. We have members throughout the Illawarra , the Shoalhaven and Eurobodalla in the South. The Shire is bordered to the North by the Barony of Rowany, to the West by the Canton of Okewaite, the Barony of Politarchopolis and the Shire of Bordescros. To the South is the Barony of Krae Glas and to the East is the beautiful Tasman Sea. 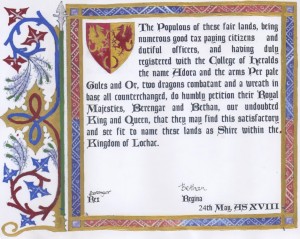 The Shire’s petition to Their Royal Majesties, Berenger and Bethan.

The first SCA group in the area was the College of St Malachy, which was first mooted at Rowany Festival AS XXXI (1997). A few months later, SCA members held a demonstration at the University of Wollongong that drew approximately thirty members to the newly-formed College. The College’s first event was subsequently held on 7th August 1997 at the University of Wollongong (Wollongong Campus).

The College was sponsored by the Shire of Agaricus. Agaricus consequently assumed responsibility for the greater Wollongong area, in which the College was located. Over time, the expanded Shire attracted members all the way from Wollongong to Jervis Bay.

At Rowany Festival AS XXXVIII (2004), a proposal was made to split Agaricus into its northern and southern parts. The subsequent poll overwhelmingly favoured the creation of a new shire covering the Illawarra and Shoalhaven regions. The Shire of Agaricus continued to serve the south-western Sydney area until it was officially closed in 2014, and the lands of Agaricus were divided once more between the Shire of Adora and its neighbours.

The first event of the new Shire, the Feast of the Four Winds, was held on the 13th November 2004. The feast has been held every year since except for 2012, when the Shire hosted Lochac’s November Crown event.

The Shire was originally known as Colles Ardorum, being Latin for hills of flame or hills of passion, and inspired by the Illawarra Escarpment and the Illawarra Flame Tree. This name, however, in January 2007 was notified by the College of Heralds as unacceptable to not being a meaningful Latin place name.

It was announced on the 2nd of April 2007 that the name of Adora was the winner of a closely contested poll. Adora is one of the biblical era names of the Palestinian town now known as Dura, and had been suggested as an acceptable sound-alike to Ardorum. The runner up in the poll, which was actually leading in the poll before allocation of preferences, was the Welsh name Caerleon-yn-Arfor  meaning “Fort of the Legion by the Sea”.

The first event of that was held in the Shire after its new and current name had been accepted by the college of Heralds, was the Flametree Ball on May 24th 2008. The Flametree Ball, has been held each year in May since 1999 (when it was sponsored by the College of St Malachy). In subsequent years, Adora has held other events such as Cold War and the monthly event known as “Omnia”, both held at the Guides Camp in the escarpment above Wollongong, as well as the Tournament by the Sea which is held near Bateman’s Bay.

The Flametree Ball in Autumn, Cold War in Winter, the Feast of Four Winds in the Spring and the Tournament by the Sea during Summertime have become beloved annual events in the Shire of Adora. Please contact the Seneschal or see the Events page for these and other upcoming events for the Shire of Adora and other nearby medieval re-enactment groups.

Current:  Aethelflæd of the Wild Seas

Past Seneschals (in order from the first to the most recent):